It‘s not too early to revel in the buzz of what is sure to be one of this summer’s most thrilling cinematic rides….

Directed and co-written by James Gunn ((Director of both Slither and Super)), Guardians of the Galaxy is presented as the tenth movie in the Marvel Cinematic Universe ((The other nine are in order of release: Iron Man, The Incredible Hulk, Iron Man 2, Thor, Captain America: The First Avenger, Marvel’s The Avengers, Iron Man 3, Thor: The Dark World, and Captain America: Winter Soldier)). Looking every bit a comedic space opera and channeling The Fifth Element or Farscape with its rich and stunning visuals, the first, full-length trailer for the film was released this week. And with its premier came a wave of fanfare and excitement as fans of the upcoming film sang its praises and lauded its edgy humor. So with that in mind let’s answer the questions that we know many of you have been asking: Who exactly are The Guardians of the Galaxy? What is a Groot? and Is that a talking racoon?

Presenting: The Guardians of the Galaxy 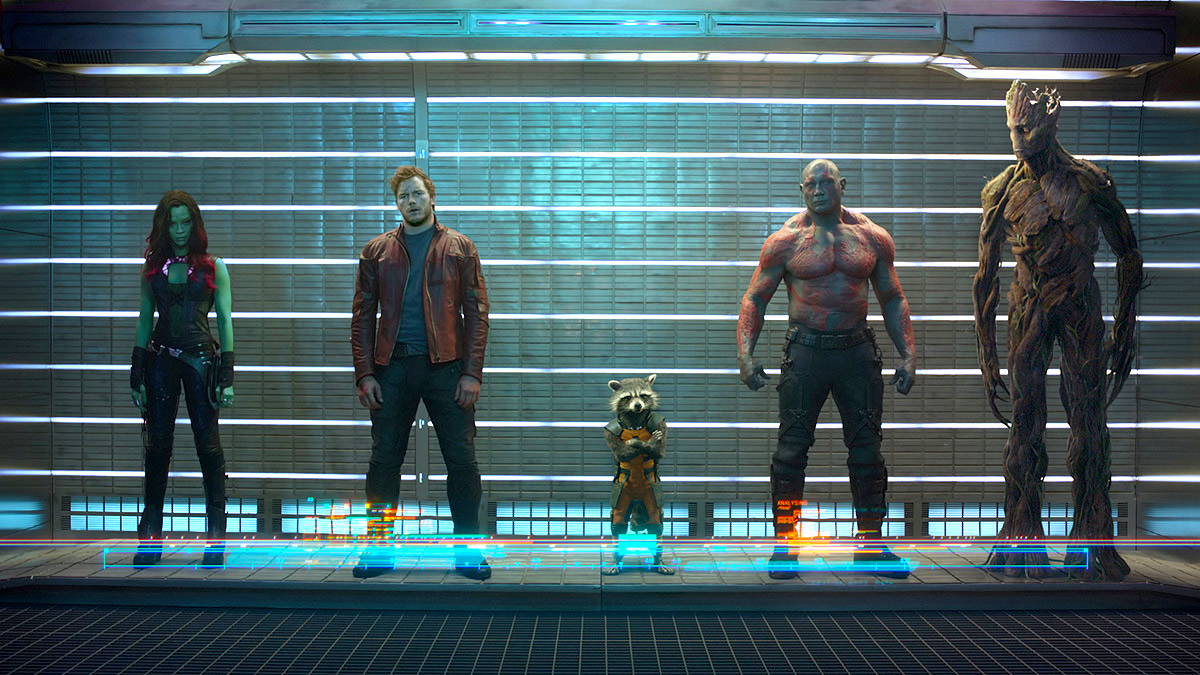 The Guardians team featured in Marvel’s upcoming film is the second group to operate under this name. The series was originally created in 1969 by Arnold Drake and Gene Colan and had The Guardians operating in the 31st century, in a timeline alternate to Earth’s. The genesis of the modern Guardians of the Galaxy however, takes place in our present day and begins with their emergence from the aftermath of the brilliant Annihilation: Conquest storyline ((A must read!)). A storyline that found the warriors Gamora, Peter Quill, Rocket Racoon, Drax the Destroyer and Groot emerging from Annihilation: Conquest intact and banding together as a motley crew of survivors and rag-tag misfits ready to stand up against any galactic threat. And as is always the case with Marvel’s comics, these threats never truly disappear.

Peter Quill, the wayward leader of the Guardians of the Galaxy and self-proclaimed Star Lord, is no superhero or alien with otherworldly powers. In the modern adaptation of the comic, Quill was born to a human mother and an alien father who crash landed on Earth. Taken from our planet in the 1980’s, he has spent his youth as a rogue, traveling about the galaxy and frequently relying on his charisma and superior intellect to get himself out of trouble, often with comical results. Flush with 80’s era humor, stunted social graces and a youthful vigor, this manchild somehow wields the very adult ability to sacrifice himself for the greater good of other people.

Gamora, the stepchild of Thanos, arguably the universes most hated villain, is a ruthless killer who is at her best when she is doing just that, inflicting death. The sole survivor of her race, the Zenwhoberi, she was adopted by Thanos and trained as his own personal assassin. Perpetually referred to as one of the most dangerous women in the universe, she has grown wary of her reputation and is searching for a greater meaning to her life. Despite her attempts at soul-searching, you most definitely do not want to be on the receiving end of Gamora’s wrath.

Groot is a species of alien life that looks like a tree, if a tree could walk around and speak. He is actually quite communicative, but understanding what he is trying to say at any given moment is seriously hampered by the fact that the only words he ever speaks are “I am Groot!” Yet somehow, through his use of inflection and expression, this gentle giant of a plant is able to convey a wide range of emotion and meaning with these three words. Of all The Guardians, Groot is the most innocent, the most pure. Virtually indestructible, he is Rocket Raccoon’s personal houseplant/muscle, and at any point in time he can either be terribly deadly or entirely sweet.

Rocket is Marvel’s tiniest titan and a raccoon who has been genetically and mechanically altered. He is the product of extensive experimentation on lower life forms to create caretakers for the mentally ill inmates on the abandoned planet Halfworld. A starpilot himself with superior tactical and military insight and a strong sense of loyalty, he spent his days before joining The Guardians as the captain of his own starship, the Rack ‘n’ Ruin. Alongside his first mate Wal Russ (a talking walrus), the duo were charged with protecting Halfworld from outside attack and preventing the all powerful Gideon’s Bible ((The Beatles allusions to the song “Rocky Raccoon” are conscious and deliberate as Rocket’s character was inspired by its lyrics.)), containing the sum of information about Halfword’s colony, from falling into villainous hands. After the destruction of his ship and the curing of the lunatic inmates on Halfword, Rocket drifted through the galaxy, eventually teaming up with Star Lord during the Annihilation: Conquest storyline. Since then Rocket’s best pal has been Groot, and together the duo have blossomed into the greatest thing to happen to sci-fi culture since Han Solo teamed up with Chewbacca.

If there could exist a physical personification of revenge, then Drax the Destroyer is it. An adept warrior laser-focused on a personal mission, he has one goal in life and one goal only, to avenge the loss of his wife and child. If you are a fan of the Hulk but are turned off by his blood-red rage and Hulk-smash sensibility, then Drax the Destroyer is the character for you. More intelligent and logical than the Hulk, but with similar strength and stamina, he is humanized and ultimately easier to relate to due to the existence of his oversized heart of gold.

So there you have it! A little primer on the paramount characters charged with safeguarding the fragility of our galaxy. Taken as a whole, what Marvel appears to be doing here is tackling a storyline that is a considerable departure from the comic book movies it has made in the past. In a sense, they are taking a huge risk, but from the looks of the trailers and promotional materials so far released, it is difficult to not view this film as anything but fresh. A new diversion for a legion of loyal superhero fans who have come to know what to expect, and how the story ends. What Marvel is choosing to do here with Guardians of the Galaxy is reinvent the idea of what a traditional superhero movie is, and to their credit, offer up a comic book flick that no one has truly seen before. And like the always profound Groot so perfectly states, “I am Groot!” Words of wisdom with which I would most certainly have to agree.

0 replies on “Guardians of the Galaxy: a primer”