Beck’s break-out album Mellow Gold turns twenty this month. With that in mind we take a look back at what made this record so grand….

I love Beck. Odelay and Sea Change are firmly established in the upper echelons of my favorite albums of all time. But when I first heard his major record debut Mellow Gold  back in 1994, it completely blew me away. Copied onto a cassette tape for me by a childhood friend who always had the newest shit, it was nothing like I had ever experienced before. It was daring mixed with rebellion. Nonsensical experimentation flecked with spunk and razor sharp irony. Its tracks were flush with uncanny samples, wild sound-effects, stoner rap and toe-tapping beats born of drum machines. It was a perfect distillation of Beck’s anti-folk1, lo-fi sound and I couldn’t get enough of it.

Rushed to press after the unexpected success of Beck’s independently-released single “Loser,” Mellow Gold dropped on March 1st, 1994. The album was a low-budget endeavor, hastily pieced together from home-recorded tapes. But the do-it-yourself feel of Mellow Gold just worked and the album is, to this day, a stunner. It was lowered expectations swimming in a bong-hit haze of genius. A poetic heaping of truth masquerading as an unbroken stream of musical consciousness. It flowed effortlessly from rock and roll to rap and folk to psychedelia as if there were no differences between the genres. As if to Beck music was an experience not to be compartmentalized and sub-divided into lesser halves but to be devoured as a whole.

But by whatever channels the uniqueness of Mellow Gold’s sound ultimately made it to your ears, the first time you heard it you just knew that you wanted to hear it again. To pause, compose yourself and say: Did that just happen? Did that seriously just go down? That Mellow Gold was nonsensical and infectious was what weirdly, somehow, made you want to give it another go. To rewind the tape and play it back again. Beck succeeded at what so many of his generation had tried, and failed, to do. He presented his music as a cultural roadmap for a generation and we swallowed it up in droves. Anointed ourselves in the knowledge that the phenomenon of Beck was real and we held him, our generational messenger, our Slacker Saint, up on high.

Now, twenty years after the release of Mellow Gold, a more somber, mature Beck finds himself having put out his twelfth album, Morning Phase. A companion to 2002’s Sea Change, Beck’s latest is some of the finest work he’s put out in years. A heartwarming, melodic journey, its songs are filled with a lushness of sound and an uncomplicated, straightforward delivery. But it is important to look back on the successes of Mellow Gold, for with reflection we often find illumination, and acknowledge, wholeheartedly, that its success paved the way for the Beck that we know today. And its influence gave birth to an entire culture steeped in Mellow Gold’s oddly mesmerizing sound. Helping to establish an entirely new manner of alternative rock, one that shied away from the cliched rock star persona, and that embraced, without reserve, the singular power behind ideas in music. 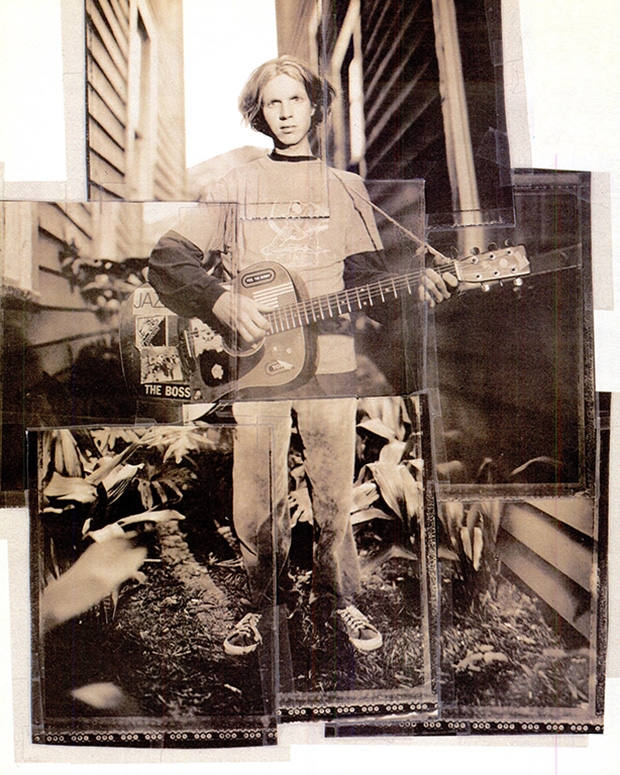 If you truly want to get to the bottom of how Mellow Gold upset the 90’s culture of youth, then all you have to do it set your Delorean to 1994, punch it up to 88 m.p.h. and transport yourself back to a time when MTV still played music videos2, and tune into Alternative Nation hosted by Kennedy or wait until the next heavy rotation of Buzz Bin. If you did that you would bear witness to the playful absurdity and confident weirdness of a long haired, lanky looking kid walking around sunny Humboldt County singing about “forces of evil in a bozo nightmare.” The video was “Loser” and the song was an instant hit, quickly rocketing up the musical charts, becoming, almost overnight, an anthem to a generation raised on MTV.

Epitomizing the mentality of a youth seeking a generational shift from the stiff cultural yoke of the post World War II Baby Boomers, Beck became my generation’s reluctant3 hero. And if there was one album that defined the Gen X mood at the time then Mellow Gold was it. It was a hybrid of musical styles, slyly presenting itself as a witty, straight-to-tape, hastily thrown together album as anti-commercial and unconcerned with itself as possible. And it was just that type of slant that caused the youth to flock to it in droves, elevating dirtbags to coolness and bringing eccentricity into the mainstream – resulting, rather unexpectedly, in the album going platinum. And so with that imagery in mind let us dig nostalgically deeper, seeking out the innovation present in a cross-section of Mellow Gold’s tracks, and dissect the effortless quality present in their forward-thinking sound. 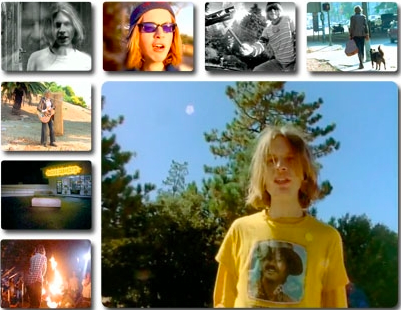 Loser – This was the song. The song that, much to his own chagrin4, made Beck. Coming on the heels of “Loser’s” almost omnipresent saturation of the radio airwaves, Mellow Gold was rushed to release in order to capitalize on the songs success. A genre-bending tour de force that blended blues with hip hop and rap, “Loser” seemed almost deliberately crude in its delivery, but it was the songs ingenious hook that made it so immediately infections5. Put together during a spontaneous jam-session with Rap-A-Lot producer Carl Stephenson, it was Stephenson’s slick complimentary hip-hop beat, his looping of Beck’s slide-guitar riff and addition of a sitar and sampled tracks that helped to create “Loser’s” eventual groundbreaking sound. And while for the most part “Losers” lyrics were nothing more than a free-associative verbal wonderland, a bubbling train of thought rife with nonsensically strung together words6, the chorus was where the song truly shined. Simply put, “I’m a loser baby” was Beck’s personal commentary on his lack of skills as a rapper after listening to playbacks of the song7. “Loser” was a one-off song, highly successful but lacking in the sort of depth and development so easily attributable to Beck and his later endeavors. But what he didn’t understand, couldn’t yet perceive, was that those four words so completely mirrored the growing mindset of Generation X. If Radiohead had given us “Creep” as a cautionary tale about the dangers of self-loathing, then Beck’s “Loser” could make us feel at ease again with our burgeoning attempts at self-mockery. And for that alone, we dubbed him our Slacker King.

Pay No Mind (Snoozer) – An ode to apathy, “Pay No Mind” was Beck perfectly channeling a folk-punk version of Bob Dylan. His mirroring of the folk-hero’s uncanny gift for talk singing and ending of the song with an uptempo harmonica solo makes it easy for one to draw lines from Beck to Dylan’s masterpiece “Subterranean Homesick Blues.” But if Mellow Gold was to a degree an anti-folk album, then “Pay No Mind” is Beck’s successful attempt at mocking the seriousness and tension that defined the 60’s and its politically-charged musical sound. Dylan went electric and by doing so alienated his fans in droves. But Beck played punk with an acoustic guitar and we ate it up with fervor. “Pay No Mind” succeeds because of its urban-slanted lyrics, its deadpan delivery, and its soothing, ambivalent chorus, “I pay no mind. I sleep in slime. I just got signed.” With that simple phrase Beck convinces us that he understands the poetic beauty and rhythmic power inherent in the punching together of seemingly unrelated words; that songs don’t have to “make sense” to truly shine. At its core, this is a song that digs much deeper than “Loser,” one that rejects the established concept of a music industry rock star for the creative independence afforded an artist free to make his own way.

Truckdrivin’ Neighbors (Yellow Sweat) – This song is a musical recounting of an urban nightmare experienced by Beck. A window into the deranged, barren existence of his downstairs neighbors steeped in tragedy and ruin8. Opening by sampling a portion of an actual argument between these two equally off-putting unsavory characters, one an “acid casualty with a repossessed car” the other a “Vietnam vet playing air guitar,” the song wittily describes the daily rhythms of this psychotic duo, dubbed the “shitkickin’ speedtakin’ Truckdrivin’ neighbors downstairs.” Musically, the song itself is lovely to behold. The darkness that permeates it is uncluttered and given plenty of freedom to reign. Sung with Beck’s voice lowered by numerous octaves, the song comes across as dark and foreboding, perfectly mirroring the characters described in this most unsavory of tales.

Beercan – The thumping party-beats of “Beercan” are playfully infectious and the song is Mellow Gold’s spritey, upbeat highlight. To his credit Beck has always had a unique gift for coming up with the choicest of basslines for his songs and that fact was wildly apparent here. “Beercan” was an instant slacker classic, effortlessly merging hip-hop, sampling, bubbling drum beats and idyllic stoner rhymes about doing nothing and having not a care in the world. If there was a song that was illustrative musically of where Beck was going to go with his party-slanted follow-up album Odelay, than “Beercan” is that song.

Steal My Body Back Home – This was Mellow Gold’s most complete-sounding song. An existential romp, the circulating presence of an Indian sitar helps to create for the listener an overwhelming atmosphere of dreamlike sound. “Steal My Body Back Home” is an exercise in control. A wildly successful attempt to slow things down, to let the listener expand into the albums headspace and take a bizarre look around. To catch a momentary musical breath, before the songs vibrant, kazoo-flecked ending overwhelms whatever sanctity the song had steadily built for itself and brings it all loudly crashing down. 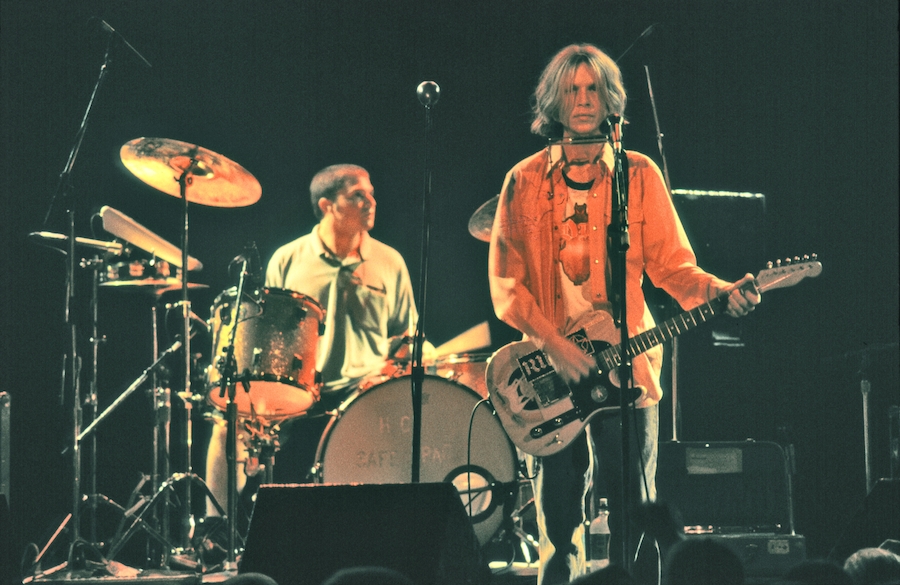 However you chose to enjoy Mellow Gold, what can be confidently said about the album is that it carved out its own cultural milieu. It was truly a groundbreaking piece of musical work. Ever since MTV’s Alternative Nation pushed ”Loser” down our throats, dictating to us that the future of “being cool” was going to be acting exactly the opposite, the attainability of coolness has never been so easy. Witness the irony of the bearded, bohemian-clad Williamsburg Hipster or the predominance of the San Francisco startup culture and their almost fanatical embracing of geekdom. The mainstreaming of nerdiness and the growing success of comic book films. All this could not have happened if Beck hadn’t made the bold and ego-less choice to share with the world his limitations as a musician. His inability to rap with the fervor and proclivity of the lyrical master Chuck D.

But what he didn’t expect, and what we as a culture are better off for, is that with those four words, “I’m a loser baby,” was born the greatest thing that ever happened to the MTV generation culturally. For yes, you are a loser, and to this day that is the coolest thing that you can be. Somewhere in that, you have to respect the irony.